This page is also available in German, French, Spanish and russian

The “International Documentation of Electroacoustic Music” includes (as of August 2019):

For further general information on the organization of the data base, see "FileMaker" (sorry, only in German)
For an introduction to EMDoku1, please see presentation paper (author: Folkmar Hein) given at the CIM14 conference in Berlin: EMDoku_CIM14.pdf.

contains information on 550 studios, including the production list, information concerning resources (hardware, software, teaching, personnel, etc.), and a short history. The list also includes studios which are no longer in operation, but are of historical significance. For some studios there is no detailed information, not even concerning works produced which were produced there. The reasons for this can be purely pedagogical function, recent creation of the studio, information which is not — or no longer — available

Here you can find a static, not up-to-date studio list which is classified according to country: (Studios-L.html)

The studio names are given both in official form and as an abbreviation.

The FileMaker studio database is not completely up-to-date (currently 376 studios). There you can find:

The EMDoku List of Works contains 51.944 works composed between 1901 and 2020 from 11.693 composers.
These works are categorized as “electroacoustic music” within the domain of “serious music” (The German GEMA calls this “E-Musik”). The “serious” attribute is not always clear and cannot always be verified for individual cases.

“Electroacoustic music” (EM) is generally defined as “music for at least one loudspeaker or transducer” or “music for more than one loudspeaker”.
(Computer music which creates scores and does not generate sound is not necessarily destined for performance with loudspeakers; such is the case for the “art” category as “score” as exemplified by a few works by Xenakis).

At least one person is responsible for the performance of electroacoustic music (tonmeister, mixing engineer, etc.).

The term “electroacoustic music” (EM) refers to “Category”/“Type”/“Function”, also with some "aesthetically" or historic items:

The EMDoku use special shortcuts for categories (selection):

Category/Type/Function can be expanded with the abbreviations + and * (shown here with the example C ≈ Concert):

Since 1983 there have been an increasing number of works that can be classified as sound art [“SA”], whereby there is generally no one required for the performance.
The category “Performance” [“P”] is relatively new and usually requires one sound designer / sound director and one performer. Often appear the "Composer-Performer".

The HTML List of Works with 19 fields imported from EMDoku1:

The FileMaker data base EMDoku1 includes other metadata fields and mass-data fields, as well as innumerable administrative and calculation fields (in each layout, only certain fields are visible):

Further (some still planned) information on archiving and documentation:

For other & updated statistics visit    https://www.emdoku.de/de/statistik 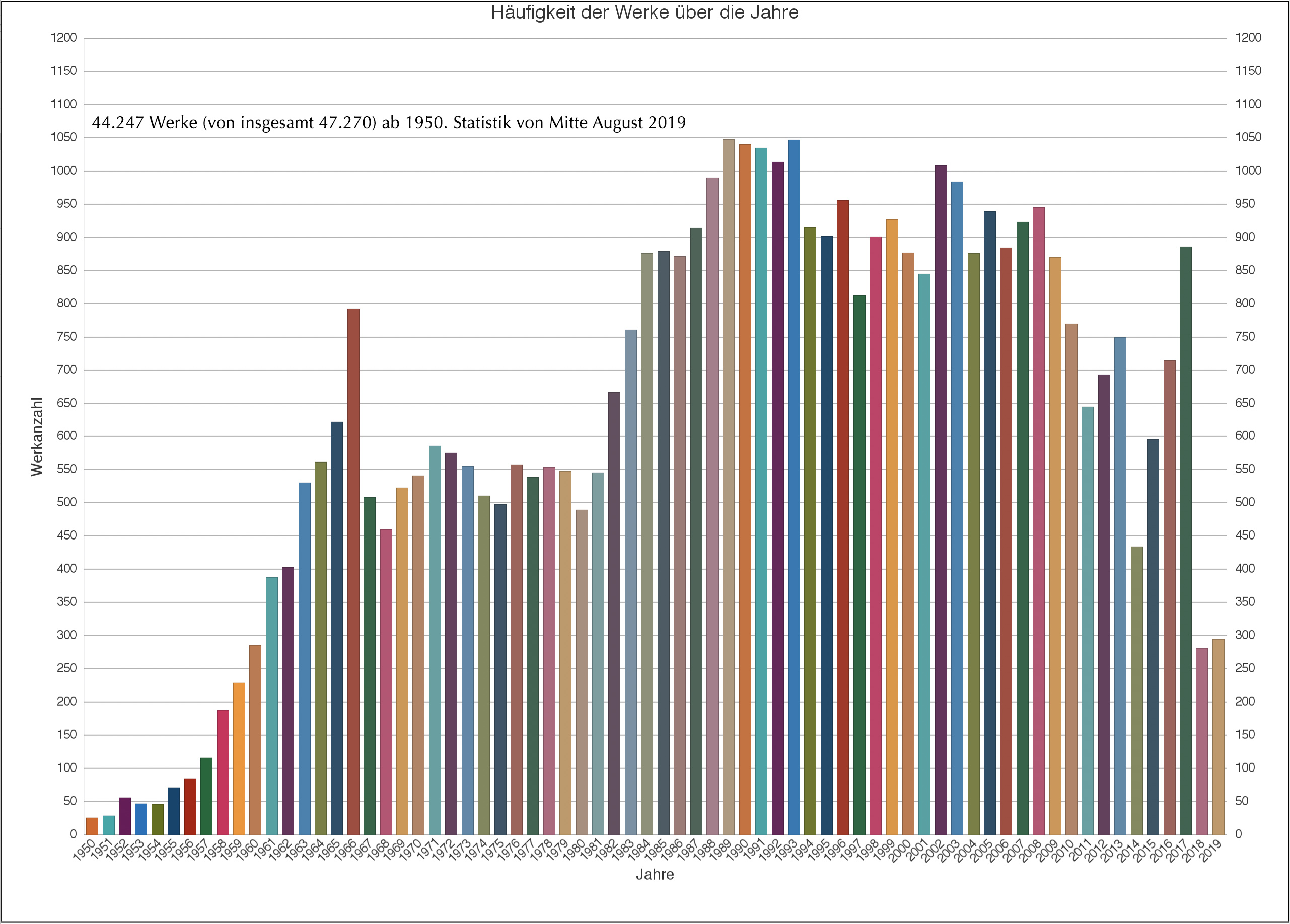 All the list of works in available media (vinyl, CD, DVD, etc, up to the end of 2015) is organized in tables within three frames.:

The relatively large table in the main frame contains a very large number of works in a single file, so that searches for labels, names, or titles can be comfortably carried out using the user's web browser tools.

On the Beginnings of the Documentation / Sources

This collection of data on electroacoustic music "EMDoku" has developed over a number of years:g:

The historical part of the EMDoku (from the 1940s through the 1980s) is nearly completely cataloged. This includes individual composers whom have already been objects of research, as well as composers who have added to the lists themselves.

The EMDoku is relatively complete up to the year 2009. After this date, the data is — logically — not as complete. Through the positive response from users and with the help of further publications, it will hopefully be continually improved, expanded, and completed.
Thank you for your support!

For any questions, suggestions, or comments, please write an email to: info at emdoku dot de